The culture of Chamorro

In Chamorro culture there is Chamorro lifestyle, Chamorro music, Chamorro dance, etc. with reference to relics such as the “Latte Stone”. Latte Stone is a megalithic stone left in the Northern Mariana Islands, including Guam and Saipan, and is characterized by the shape with a bowl shaped stone called “Tasa” on an upright stone pillar stone called “Haligi” . The main theory is that Latte Stones were used as the foundation of a high floor dwelling. When Magellan discovered Guam Island in the 16th century, and as Spain’s rule of Guam began, it does seem that Latte Stones were being used as such.

Chamorro culture currently residing in Guam has received considerable influence from Spain’s language, cooking, dance and so on. However, since the Chamorro language such as “Hafa adai” (Hello) “Si Yu’us Må’åse’ (Thank-you)” is some Chamorro words frequently used to this day, so please use them if you have a chance.

The villages of Guam

Guam is divided into 22 villages or areas. From the north, in order from the north, in the order from the north, Yigo, Dededo, Tumon, Harmon, Tamuning, Hagatna (Agana), Maite, Mongmong, Toto, Mangilao, Barrigada, Sinajana, Chalan Pago, Asan, Yoña, Piti, Santa Rita, Agat, Umatac, Meliso(Merizo), Inarajan, Talofofo.  The largest area is Yigo village at the northern end, and Dededo village has the largest population. There are villages in the southern part of the island that are now having trouble with depopulation, although from maintaining culture, there are many homes where the traditional lifestyle of Chamorro remains as was. The nature is rich and you can see the original appearance of Guam.

Each village has a Mayor’s office (village office), which supports the local people’s livelihoods. There is also one Catholic church in each village, where the a guardian Christian Saint is enshrined to protect the lives of the villagers. A festival called “Fiesta” is held once or twice a year to pray for the guardian Saints, which is a traditional event of Guam that continues from the Spanish rule era. 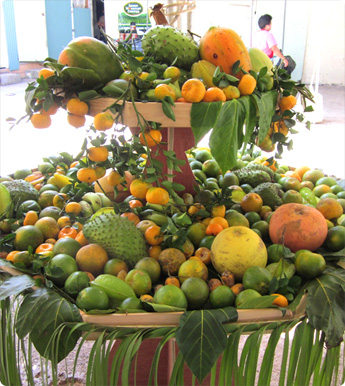 Guam has traditional dishes called Chamorro dishes that have been inherited from old times. It is Guam original cuisine influenced by Spain, Japan, and other Southeast Asian countries. Representative examples are red rice and kelagunen. There are also many dishes using coconut milk, and these dishes will definitely appear at local parties with cooking by barbecue representing one of the current Guam styles. In addition, Fina deni sauce, which is indispensable for putting on Guam barbecued food(and other foods) plays supporting role with Guam cuisine.

Many times locally, tropical fruits such as mango, banana, pineapple, taro and breadfruit is used from the local household garden.

When you go out to the city you can enjoy not only such local food, but also dishes from various countries. American chain stores and franchise stores, you can enjoy American cuisine such as full steaks and hamburgers, as well as other Asian dishes that are Japanese, Chinese, Korean, Vietnamese and Thai. There are other ethnic restaurants such as Italian, French and Mexican dishes, which are also recommended for eating.  Also popular is All-you-can-eat as well as all-you-can-drink meals offered by many hotel restaurants.

People on Guam love Japanese dishes such as teppanyaki, sushi, sashimi, tempura and ramen. Also loved are sweet cakes, and ice creams. Notice that you can enjoy the colorful rolled sushi that many restaurants boast about.

Guam is full of colorful tropical flowers throughout the year. The island flower is Bougainvillea, in Chamorro it is called “Puti tai nobio”. Various flowers can also be seen in each village. Many colorful flowers are in bloom year round. Even in the garden of hotels and private houses, you will see beautiful tropical flowers. The representative one is hibiscus and the plumeria used for making leis. Also, bright red flowers called frame trees are often seen along the side of streets. 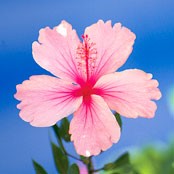 Hibiscus
There are hibiscus called “Flores Rosa” of various colors such as red, pink, yellow and white. You can see these flowers everywhere, including the hotel gardens and the private homes and businesses. 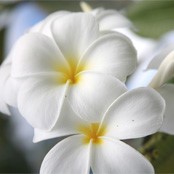 Plumeria
It is an elegant flower that has a sweet smell commonly used to make the plumeria lei and wreaths for headwear. In Chamorro “it” (yellow plumeria) is called “Kalachuchan Amariyu”.