It is said that the people who came over to Guam by the canoe “outrigger” from Southeast Asia such as Malaysia, Indonesia, and the Philippines then became the ancient Chamorro people. They excelled in navigation, hunting, and fishing and were coming and going between the islands of Micronesia. In the gene investigation in recent years, the relation between Far Eastern Asia and an ancient Chamorro people such as Japan and China is clarified, too. At that time, people lived calmly by fishing on the beachfront. Fishing is part of life for Chamorro people. The techniques of canoeing and the ability to accurately read the direction from the position of stars etc. are very excellent, and the fishing technology of the Chamorro people is highly appreciated up to this day. 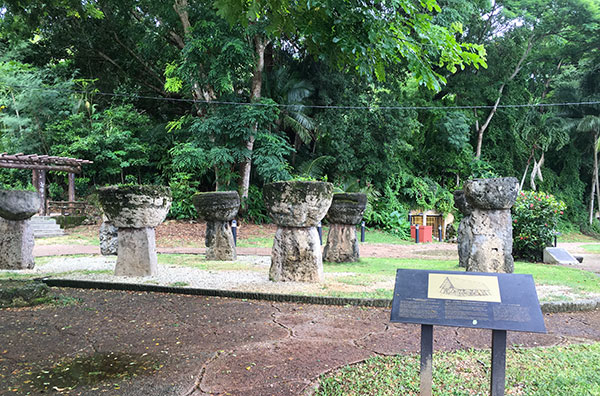 Portuguese explorer Ferdinand Magellan navigates around the world and makes a port call in Guam on March 6, 1521. It was the first contact Europeans had with the island of Guam and an important stop during the expedition that had begun in Spain in 1519. Magellan then became the first person to cross the Pacific Ocean, culminating with his arrival in Guam and the Marianas islands.

Guam is declared by Spain, the Christianity and lifestyle of Spain is compelling as the Spanish rule begins. By the rule of Spain, the lives of the people of Guam will change greatly. Catholicism, which is now a spiritual stronghold of Guam’s local people, was brought by the Jesuit missionary led by Dr. Diego Luis de San Vitores, 1668. In addition, agriculture and livestock industry begins in Guam at that time, as the local people began wearing clothes.

The natives of the island revolted against the teachings of Catholicism, which started the Spanish Chamorro war which took a heavy toll on the lives of the Chamorro people.

1898〜 The advent of America era

Spain ruled Guam for 333 years and came to an end when the United States won the U.S. west war and Guam then was ruled by American Naval Forces.

World War II had already begun, and the Pacific War starts. A Japanese army of 5,000 people occupies Guam immediately after the attack of a Japanese army of the Pearl Harbor, and the Japan rule starts on December 10. The U.S. Army landing and fierce battle ends Japan’s rule of Guam which lasted for two years and seven months. Soon after, it was the end of World War II.

About 400 years from the arrival to Guam by Magellan to the end of World War II, for Guam, it was a period of time that Guam was tossed around by the world, so different from Guam’s previous calm living. Today, Guam has been playing its role as an important base for the Pacific strategy of the US military, while continuing to grow as a modern city centered on a growing tourism industry. In addition, efforts are being made to explore their own roots again, such as putting emphasis on education to support Chamorro language, culture, and survival.

Sergeant Shoichi Yokoi of the former Japanese soldier who had been living in the Guam jungle for 28 years was discovered.

Alupang Beach Club established and is now a major sightseeing resort which is centered on tourist from Japan, Korea, and all other visiting countries.