The beaches of Tumon Bay and East Hagatna Bay offer gleaming white sand and crystal clear, warm waters for swimming, snorkeling, jet skiing, parasailing or just relaxing and enjoying the fantastic sunsets over the Philippine Sea. With its year round warm and crystal clear waters, Guam is one of the most desirable scuba dive destinations in the World. Guam offers seven world class golf courses open to the public and a military course for authorized military personnel.Guam has a number water parks and beach clubs that offer jet skis, parasailing, windsurfing, kayaking, paddleboats, pools and water slides and various other water sports. Other popular Guam outdoor leisure activities include hiking, boonie stomping, skydiving, parasailing, deep-sea sport fishing and more.

Guam’s climate is pleasantly warm year-round. The average annual temperature is approximately 81 degrees; generally, the range is from the low 70s to the middle 80s. The coolest and least humid months, marked by prevailing westerly trade winds, are from December through February. Although the warmest months are from March through August, the refreshing trade winds blow steadily. The annual rainfall totals 80 to 110 inches. There are two seasons, the dry season and the rainy season. The dry season begins in December and extends through June. The rainy season begins approximately in July and extends into November. 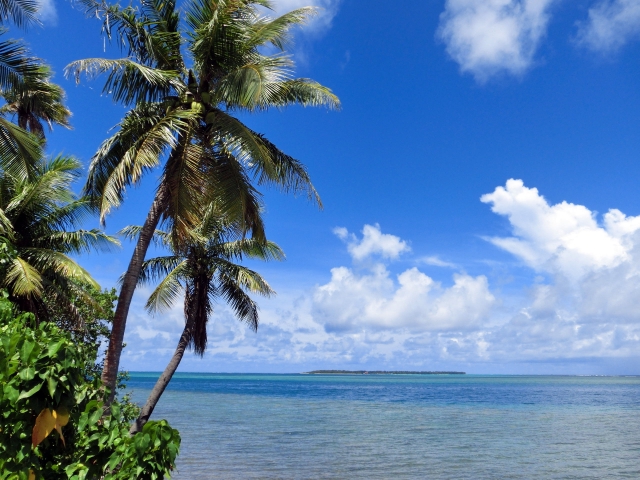 The island is sharply divided into a northern limestone plateau with a general elevation of about 500 feet (150 metres) and a higher area of volcanic hills to the south. The plateau is covered with a thick growth of jungle; the volcanic hills support mainly sword grass. The hills rise to an elevation of more than 1,000 feet (300 metres); their lower slopes to the east (and also, in part, to the west) are covered with younger limestones, generally similar to those of the northern limestone plateau. The island rises to 1,332 feet (406 metres) at Mount Lamlam, in the southwest. To the southeast of Mount Lamlam is another major hill, Mount Bolanos (1,240 feet [378 metres]). Guam has a pleasant tropical climate tempered by the northeast trade winds and the north equatorial ocean current that flows west across the Pacific. Temperatures range between approximately 70 and 90 °F (20 and 30 °C) and are fairly even throughout the year. Average annual precipitation is about 95 inches (2,400 mm), three-fourths of which falls in storms during the wet season, generally starting in May, June or July and lasting through November.

Native Guamanians, ethnically called “Chamorro”, are of basically Malayo-Indonesian descent with a considerable admixture of Spanish, Filipino, Mexican, and other European and Asian ancestries. Chamorros and other Micronesians constitute about half the population. Nearly one-third of the people are Asians, notably Filipinos and Koreans, and there is a small minority of people of European ancestry. About three-fourths of the people are Roman Catholic Christians, and one-eighth of the people are Protestant Christians.

Guam is an unincorporated territory of the United States governed under the Organic Act of Guam, passed by the U.S. Congress and approved by the president on Aug. 1, 1950. The Organic Act made all Chamorro people U.S. citizens. Although they do not have the right to vote in national elections, voters do caucus during the presidential primary season and send delegates to the Democratic and Republican national party conventions. A 1968 amendment to the Organic Act provides for the popular election of a governor and lieutenant governor to four-year terms. All persons age 18 years or older are permitted to vote. The legislature is a unicameral body with 15 senators directly elected at large for a term of two years. Guam also elects a delegate to the U.S. House of Representatives for a term of two years; that delegate has limited voting rights that exclude the ability to vote on the final passage of legislation. The people of Guam voted in 1982 in favor of pursuing a commonwealth relationship similar to that established in the Northern Marianas. A draft Commonwealth Act was approved in 1987, and negotiations with the U.S. Congress were initiated. The highest appellate court is the Guam Supreme Court. There is also a District Court of Guam, whose judge is appointed by the U.S. president for a term of eight years. There are two levels of local trial courts: the Superior Court of Guam, for criminal and civil cases, and the traffic, juvenile, and small-claims courts. Judges are appointed by the governor with consent of the legislature and are reconfirmed by majority public vote every four years. Appeals may be made to the U.S. Court of Appeals for the Ninth Circuit and to the U.S. Supreme Court. Each of the island’s villages is headed by a popularly elected mayor. The mayors and vice mayors form the Mayors’ Council of Guam, which makes recommendations regarding administrative and fiscal policies and acts as a liaison between the three branches of government, the military communities, and U.S. federal agencies. Education is free and compulsory between ages 6 and 16. The University of Guam, which opened in 1952, is a four-year institution that also provides graduate programs at the master’s degree level. Health conditions are relatively advanced. Facilities include public, private, and military hospitals and local clinics. Life expectancies for men and women are roughly comparable to those of the United States. The main causes of death include heart diseases, cancers, cerebrovascular diseases, and accidents.

The development of Guam into an important U.S. military base brought about profound changes in the island’s agricultural patterns after World War II. Foodstuffs were imported in increasing amounts at the expense of local cultivation, and Guam now imports most of its food. The U.S. armed forces are represented at multiple military facilities on Guam. Andersen Air Force Base and its annexes are concentrated at the northern end of the island. U.S. Navy facilities, located around the island, include a naval air station, a naval base with a ship repair yard, communications centers, and a hospital. Work at the military facilities has drawn many islanders away from their former lives of subsistence agriculture and fishing. Tourism is the most prominent component of the economy, with more than a million visitors arriving per year. There are several luxury hotels along Tumon Bay, which has been highly developed as a tourist area. An international airport links Guam with other Pacific islands, Asia, and Hawaii and the continental United States. Guam is a duty-free port, and this status has attracted a number of small manufacturing companies from countries in Asia and has also prompted some immigration. Major imports—mostly from the United States and Japan—include food products, motor vehicles and parts, and shoes and other leather products. The leading exports are motor vehicles and parts, food products, scrap metal, and tobacco products. Finland, Japan, and the Federated States of Micronesia are the main export destinations.